Drogheda Brass Band members were delighted to find out on Monday afternoon that the band had finished fifth of 12 competing bands in the Kapitol Cory Online Championships 2021 1st Section.

The contest has been ongoing for three weekends throughout the month of March and reached a thrilling conclusion on Sunday night (28th) with the final bands from the championship section ahead of the much-anticipated results announcement.

Although originally disappointed not to have placed in the top three, when the full results were announced the following day, the members were thrilled to find out they'd placed fifth.

Strata Band was the clear winner of the section with 4pts (second, first and first from the judges, respectively), with Coalburn Silver Band second on 7pts, Johnstone Band third on 9pts and Dallas Brass Band in fourth on 13pts. Strabane Brass finished sixth with 16pts, and won the best regional music award in the section too.

Drogheda Brass Band had opened its entry with some brilliant animation, done by the band's musical director Captain John Carpenter of the Army No.1 Band (he put all three videos together too), as the band told the world "I'm Still Standing", using John's arrangement of the popular Elton John song, as used in the hit movie Rocket Man. 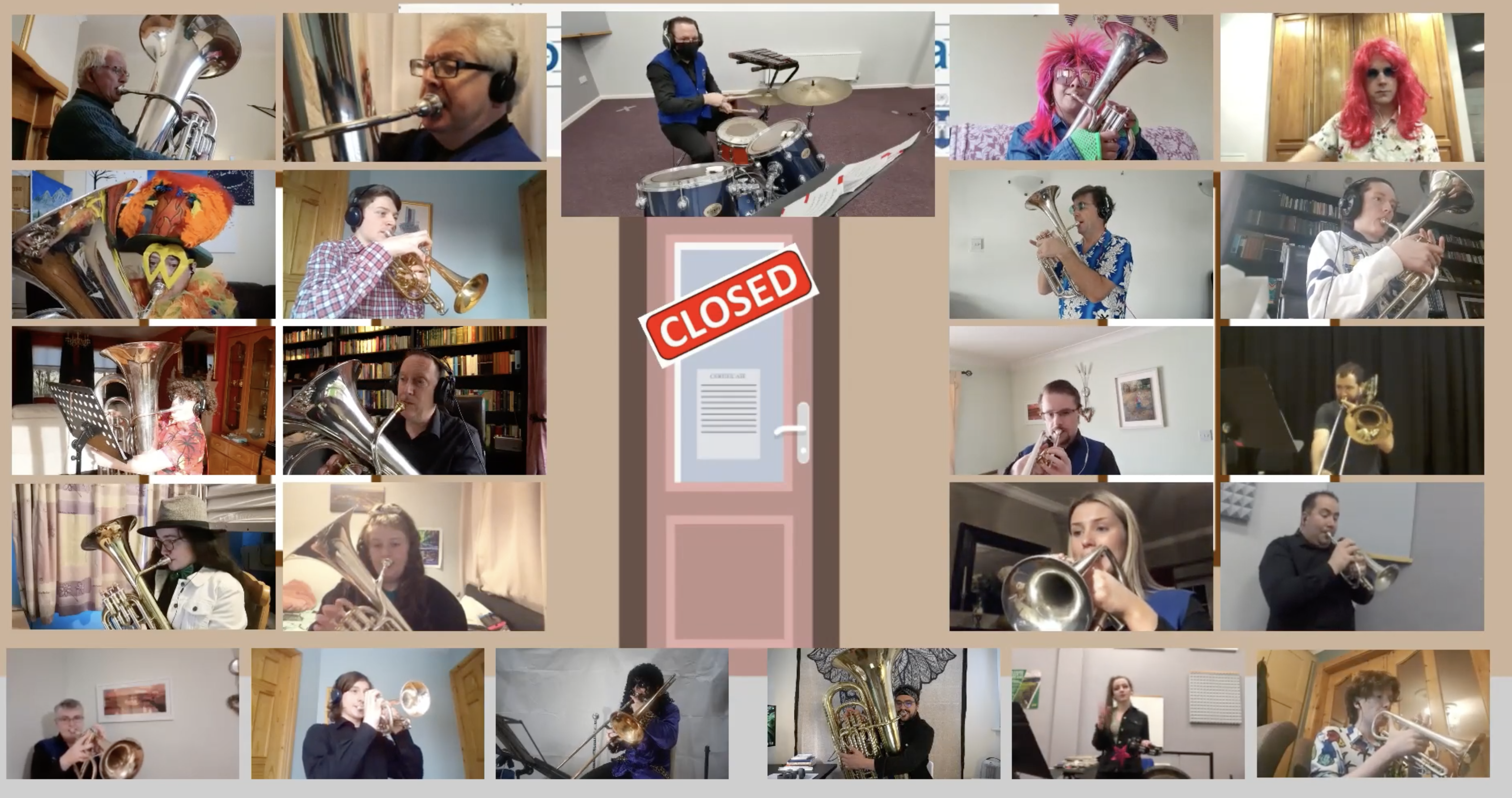 That was followed by Mark Armstrong's arrangement of Shaun Davey's haunting Fill To Me The Parting Glass, transcribed for brass band by John Carpenter.

This piece also featured the amazingly talented Darragh Ó Héiligh on uilleann pipes - a feature that went down very well with the judges, even if they weren't able to pronounce the name of the instrument properly!

It also featured some stunning video footage shot on a drone by the band's principal euphonium player Anthony Murphy. These sequences really gave a feeling of the local area, with the Boyne Valley and town of Drogheda looking stunning from the aerial viewpoint.

The band has had 10,000 views on this video alone, with some amazing feedback on social media from the likes of Visit Louth, Discover Boyne Valley and Ireland's Ancient East. 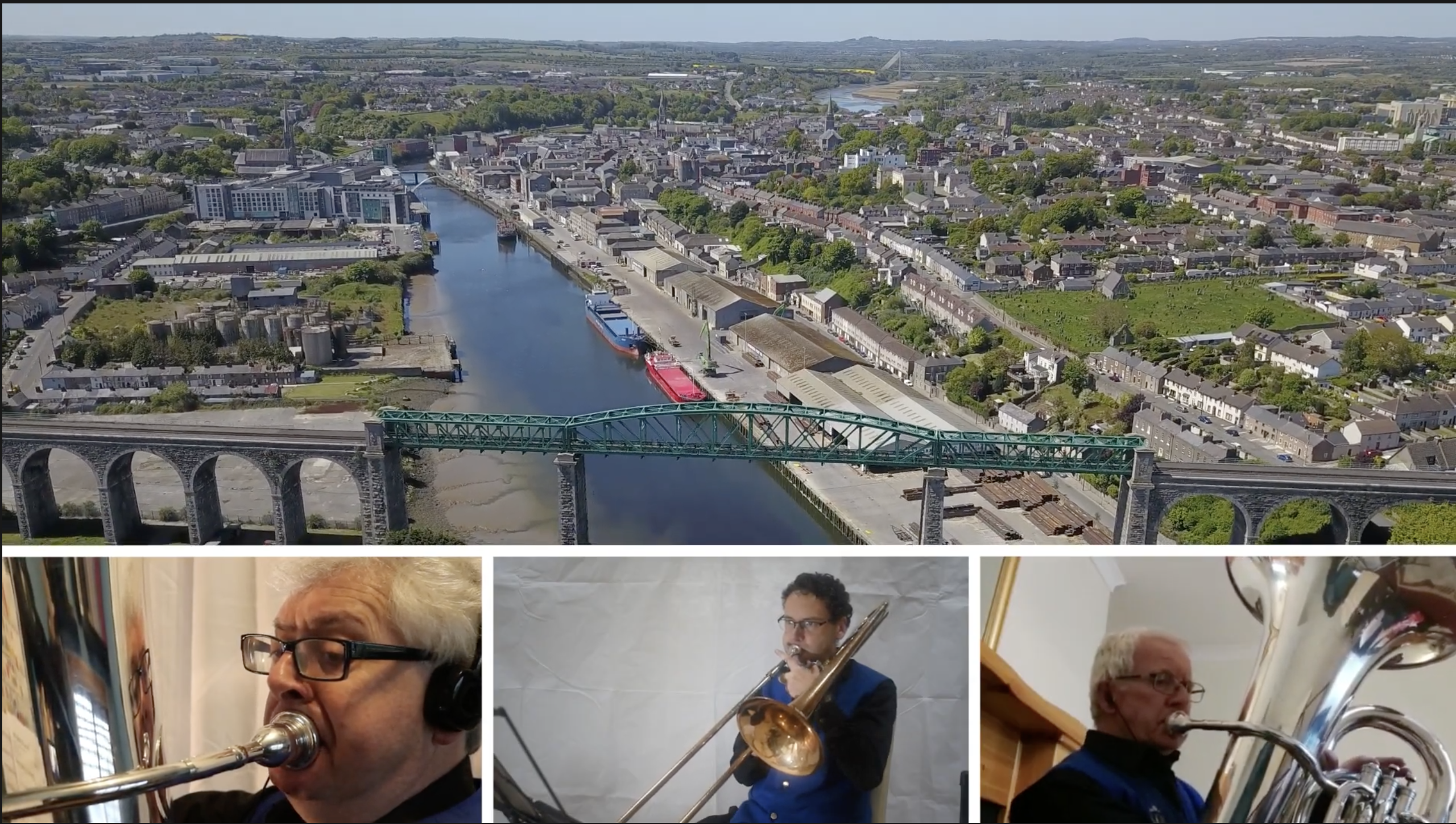 A fantastic finale followed, with the band playing the rousing Through The Flames, by Paul Lovatt-Cooper.

The band has been busy in lockdown, keeping active on Thursday nights (usually the night the band rehearses, as well as Sunday mornings) with quizzes, games nights and video chat sessions.

It's been a very tough period for brass bands throughout the world that are in lockdown and it's no small feat that the band has managed to enter two virtual contests, as well as organising, arranging, videoing and editing its first ever virtual Christmas concert in December.

Huge credit must go to John who took on a huge burden of work with arranging one of the pieces, transcribing another, creating animations, editing and putting together all three videos in this entry - and not to mention sorting the audio from the files too!

Band chairperson Tony Collins was thrilled with the result: "The band should be very proud of its efforts. We've kept busy and stayed together in these trying times.

"John has been brilliant and has taken on all that workload to help the band.

"We have a fabulous group of young people actively involved at committee level and it's really reaping the rewards of that inclusion and success now."

With no end in sight for the band to the restrictions on meeting as a group to rehearse, they will be busy in the virtual world for some time to come.

And with this fantastic result in the bag, who knows where it could take them!